So I enjoy gin…  Like, I really really enjoy gin…  Just a little tit bit for those visiting this blog for the first time.

I started with drinking gin…  Then I moved on to social media-ing about gin…  Writing about it…  I then dabbled with flavouring gin last year…  So, to me, it seems the natural next step was to (kinda) make gin.

A month or so ago I attended a tasting session at the Eden Mill Blendworks venue in Glasgow.  We were given a verbal tour of the history of the brand and then allowed to taste three of their gins (one of which was a liqueur from their new range) and given a bit of back story to each.

Towards the end of the tasting session they touched slightly on the Blendworks experience.  Now…  It’s worth noting that I’d heard about the Blendworks and had been considering it for some time…  The final decision was made because, quite simply, I got a tenner off per person because I’d went to the tasting…  I’m 100% gonna go anyway so I might as well get a tenner off ALSO I figured I’d tie it in and make it a lovely birthday day out.

So I asked my old dad if he fancied a wee day out making a gin with me and he (obviously) jumped at the chance.

So we headed into Glasgow on Sunday 8th September grabbed a lovely lunch then wandered down to Princess Square to begin our gin making experience.

The first thing I noticed when I went in for the tasting and, again, when I went in for this was that the staff are very friendly and welcoming…  In fairness…  Anywhere where within a minute of getting there they fire a G&T into my grubby little mitts is good in my books!

The welcome G&T was their Original Gin with some Fentimans tonic and garnished with grapefruit.  The only thing I’d recommend if you’re going is to catch the guy before he puts the tonic in as, for my personal taste, they add too much.  The other thing I’d like is to try the gin neat before they add the tonic as I’ve actually never tried Eden Mill Original.  To be honest though I’m sure if I had asked he’d have poured me a little nip to try.

So anyway…  They then take you into the room where you’ll spend the next couple of hours.  I love the overall aesthetic of the place and the room where they host you always looks really cool.

The table was set for the four pairings that were attending.  We all filtered in, grabbed a seat and sat ourselves down.  At each place setting was;

We then hung up our jackets and grabbed either a labcoat or an apron…  I took a labcoat because I was doing science.

Once everyone got settled we were treated to a more detailed history of the company which was presented well and with good humour thrown in.

The actual creation started simply with the pouring of a liquid into the tasting glass.  Asked to smell it I noted it smelled not too dissimilar to nail polish remover…  Admittedly it wasn’t the MOST appetising thing I’d smelled but we cracked on anyway.  On a quick taste I wondered if it might just be pure juniper…  Reason being the taste was familiar but also I used the old noodle and figured they might start you at the start and juniper is the beginning of all things gin isn’t it?  So…  It made sense to me but I couldn’t be sure as I’ve never tasted just distilled juniper before!

Turned out I was right though…  This was, as the chap described it, the most rudimentary form of gin and would be used as the base for all the gins we made that day.

Next up we were told we would sample four liquids which would serve as the “flavour profile” for the gin.  This was done blind.  A clear liquid was poured into our tasting glasses and we were asked to take a sniff at it then taste it and see what our thoughts were…  What sort of flavour did we think it had?

The reason for this was to protect the liquids against bias.  For example… One of the first things one of the guys said was that he hated floral so this meant all the liquids were getting a fair crack at the whip.  None of these liquids had juniper in them. 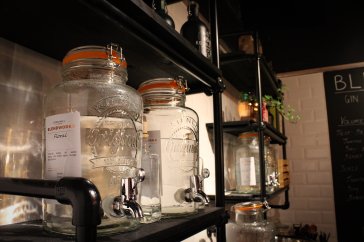 The four liquids were;

I really hated the sweet one…  I struggled to take a couple of sips of it.  I quickly decided that my gin was going to be either floral or citrus.  I was given another go of both to put off against each other to make my final decision.  My dad quickly settled on floral and I eventually swithered my way into citrus.

We were then told that we had to choose from the range of approximately 30 “hero flavours” from around the room.  We had 6ml left for our test batch which would be made up of these heroes…  It was suggested using between three and six worked well and you were able to double up on flavours that you wanted to stand out while maintaining a 6ml limit. 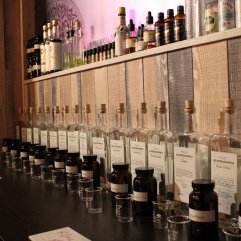 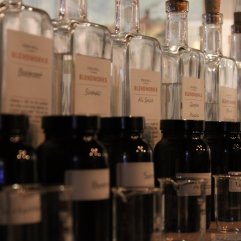 The difficulty here was we weren’t allowed to taste them and had to go purely off of smell and the tasting notes written on the bottles.  This is difficult as there are a lot of these ingredients that you really have no clue how they taste…  Tasting notes are all well and good but it would be nice to actually get to try them.  The reason given was they were harder to make.  While the other liquids being used were easy for them to make en mass the heroes were more complicated…  Fair enough.

So off we all popped going round sniffing things we, for the most part, had no idea about.  A lot of the names were familiar (because gin) but not things you come across day-to-day.

We wrote down the heroes we wanted to use and then started putting our test dram together.  The heroes I chose were;

And so, with this all noted, I created my dram…  And tried it.  I actually was really pleased with it…  Light and fresh.  We were handed some tonic to pop into it to get a feel for it as a G&T and, again, I thought it was really good.

My dad went for;

I really enjoyed my dad’s and, due to the cassia bark, it was almost festive…  I could see it being nice with some dried orange or maybe warmed up with some cloudy apple juice…  That’s the kinda feel it had to it.

I liked and appreciated the fact you got to try it in a G&T as, let’s be honest, thats what most people will drink it as so it was a good way to gauge how much you would enjoy the final product. 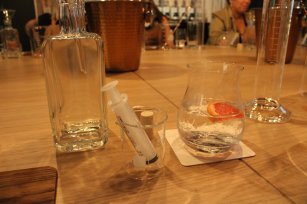 Once everyone was happy with their test dram we moved on to the main event…  Creating the final product.  I left mine unaltered and simply increased the quantity as instructed.  Our little notebooks with our “recipe” were taken away once the name had been decided on and written in.

All the ingredients were added to the big beaker, given a wee swoosh around and then poured into the bottles and sealed up using the corks.  We were told not to drink the liquid that remained in the beaker as it had a very specific purpose…  And, rather mysteriously, this was how it was left for the time being.

Our labels were brought to us to be signed and stuck on the bottles…  The absolutely class finishing touch was a little Eden Mill label to go over the cork…  Stunning little addition…  Not sure why I liked it so much but I really did.

Once the labels were on the bottles were taken away to be bagged up…  Now we were left with about 40ml of our final product…  We were then given a Boston shaker and told to fill it about two thirds full of ice…  Which we obediently did.

We were then told to add in four bar spoons worth of lime cordial and our leftover gin.  Naturally the next step was to shake it up…  Which we did.  We were then given a chilled little martini glass into which my first ever gimlet was poured. 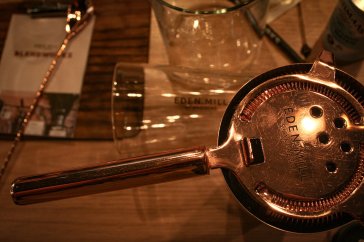 This was a smashing way to finish our session and allowed people to see how easy some cocktails are to create and how diverse gin could be…  It also let me see that I need to pick up some lime cordial.

As we finished our drinks and hung up our aprons/lab coats we re-entered the shop to receive our gins.  They had now been packaged up quite beautifully in a presentation box with a lovely little branded tulip glass. 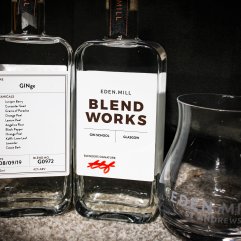 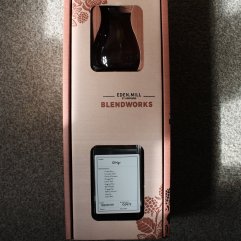 We had a great day which was a lot of fun.

If you ask me if I recommend this experience then the answer would be a very definitive “yes”.

The experience is available both in Glasgow and St Andrews.

The downside for me was that my glass was just a normal Eden Mill tulip glass (I think it’s meant to be an actual Blendworks one, at least thats what my dad got and what seems to be described on the website), and it looked like it had been kicked about a stock room or found down the back of the cabinet as it’s quite scratched which really went for my OCD and means I won’t use it but also anyone who follows me on social media knows how I feel about glassware so I’m disappointed that I have the wrong glass…  Especially as I already have two of the Eden Mill tulips.  It’s just worth double checking you have the right glass before you leave if you’re a bit of a glassware fan like me.

What I do like is that they keep a note of your recipe and will make you up a full 70cl bottle for £38 which isn’t too bad.

Get on social media and brighten up your life by giving me a follow;

You can find Eden Mill using the link below:
Eden Mill Blendworks

Feel free to share this review around, tell your pals…  Hope you enjoyed it etc and if you want more info or feel I’ve missed something out in this review drop me a message.