So the other day I went to the Shilling Brewing Co for a little tour, tutored tasting and a pizza…  Hoping to start on the road to making things right with the beer gods!

The first thing I’ll say is that you can, pretty much, only get Shilling Beer at Shilling…  That’s why you may not have heard of them…  It also makes it that much more special when you sit down with a pint of it knowing that not many people are able to enjoy it.

The thing that I always love about Glasgow (and Scotland in general) is that there’s always some mad story cutting about under the surface with most of what we do.

The head brewer has, I believe, two degrees and sacked off both of them to make beer…  Madness right?  One of the other brewers had never brewed beer until Shilling started!

The guys and girls here work their wee socks off and can only keep up with the demand for their beer within the restaurant/brewhouse itself never mind branching out…  For now! 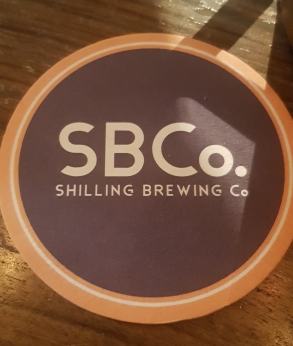 Shilling started life in 2016.  The building, like so many in Glasgow, is very old timey and cool…  Its clearly been an old bank…  You pee in the vault…  The overall aesthetic of the place is awesome…  It was a little chilly by the window though so be aware of that and maybes take a jumper during the colder Scottish months (ie all of them except probably May and June).

The name Shilling is derived from two things…  Firstly its in a bank isn’t it?  pretty much writes itself…  Secondly the old taxation system for beer in Scotland whereby the cost was based on the ABV of the beer and increased, in shillings…  obviously, for each bracket.

The guys and gals here choose the types of beer they make based on modern trends, time of the year and the styles customers are looking for at the bar.

Some styles and types are nice and safe (your IPAs, porters and reds for example) however for the more experimental stuff the guys here  have a wee baby 30l kit downstairs in the brewer’s room that they used to try their hand at something new.  The recent success of a passion fruit sour experiment has resulted in it being added to the roster.

It’s worth knowing that they brew ALL their beer on the premises in the heart of Glasgow’s City Centre…  You can see the very first step directly behind the bar and the last step before it goes into your glass above it.  The guys here take great pride in bringing to you one of (if not THE) freshest pint in Glasgow.

A limited amount of space to brew means a very tight schedule has to be adhered to in order to provide the beers to keep the bar running!  During the tutored tasting we were told that, sadly, they had to stop doing lagers because of the time they took to create comparative to beer…  I think a beer can be done start to finish in a couple of weeks which is smashing in limited space but a lager takes a couple of months…  Which is a shame but hopefully something that will come with a larger premises/brewing facility. 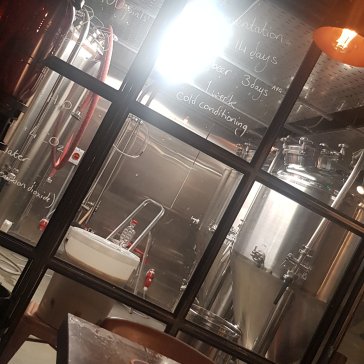 If you happen to go for the tour and tutored tasting (which I 100% recommend you do) you’ll be shown the mash ton and conditioning tanks behind and above the main bar area (mentioned 30 seconds ago…  depending on your reading speed I suppose), you’ll then be handed your (very generous) beer flight and guided downstairs into the Brewer’s Room.

Down here you’re shown the hops and malts used to create each of the four beers you’re sampling.  We were allowed to sniff and taste things that were safe to sniff and taste.  We were told the story of the beer (which you’ve kinda been told now too), how long it takes from start to finish, the target audience for each beer and they touched on their little experimentation beers.  Apparently every now and again if you rock up they’ll have some swanky new beer on a limited run so it’s worth keeping an eye out for those if you swing by.

Each beer in the flight is one third of a pint.  From right to left (light to dark) we had the Veetacore which is the Session Pale Ale and I think it sat about 4% ABV.  This was a really light, low carbonation beer that, they said, was one they would recommend for those fancying a lager.  I felt there was a pleasant amount of citrus through it but not too much…  It wasn’t particularly bitter and was very refreshing and I reckon would sit nicely in your glass during the summer.

Next along we have the Unicorn IPA.  When  I tried this  wasn’t expecting it to be so different from the Veetacore if I’m honest.  This wasn’t an overpowering flavour and, again, a nice touch of citrus but had a hint of floral before that fades and you’re left with a bitter finish.  The main scent that I got from this was of caramel…  Which I hadn’t expected.  Unicorn is a healthy 5.2% ABV.

Next up we tried the Glasgow Red…  Obviously a red ale.  On the nose with this I really noticed that it smelled, to me, like a light stout or porter…  You know?  Like I got coffee…  And a little hint of caramel…  But mostly the coffee which was a surprise.  To taste there was a sweetness up front but again, that moved away to the bitter finish.  Most red ales I’ve tried are 5%+ ABV but this one sits happily at 4.4% which I think leaves it feeling a bit lighter than the other red ales you may have tried.

And, finally, we tried Black Star Teleporter.  Now…  This one is going to sound a little funky but bear with me…   Ok?  This is a porter, its very light, and not at all creamy…  You get the strong smell of the coffee and dark chocolate that you would expect from this type of beer… But…  And this is where we’ll get a little weird…  It finished with coconut…  not that weird super sweet coconut your brain is maybes thinking…  But a pleasant kinda subtle coconutty-ness that doesn’t take it too sweet because the coconut has been toasted…  Also because the coconut is added at the end it doesn’t stay too long to overpower.  At only 4.2% it’s not too dangerous is it?! 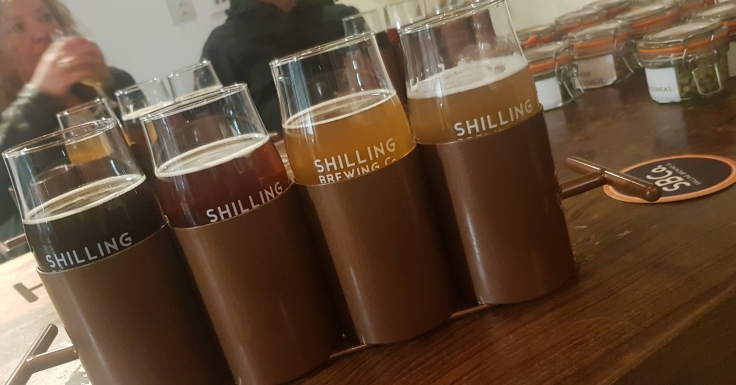 Once the tutored tasting was completed we headed back upstairs with what was left of our beer to get some food.  Our day included a pizza and, I won’t lie to you…  I’m really REALLY fussy with pizza.  Like honestly I’m terrible.  I love pizza…  But I’m fussy.

Their pizza menu is quite a swanky looking selection and not your usual meat feast, pepperoni boring stuff.  You look at the menu and the toppings and you’ll see some interesting and unusual ingredients…  I was thrilled when I saw Nduja…  Its honestly my favourite.

So the two pizzas we got were the Mixed Meats and Nduja and Pepperoni.  For dipping we picked up the Shilling BBQ and the Irn Bru Chilli Jam…  Felt we had to get the chilli jam because Irn Bru…  You have to…  That’s just how it is….  Welcome to my brain.

I loved the pizza…  I genuinely did.  The ONLY thing I’d have changed was more nduja…  But thats because I love it and literally cannot buy the stupid stuff anywhere so, on the rare occasion I find somewhere that does it I just want it and I want alot of it!

It’s worth being aware that on Mondays they do 2-for-1 pizzas so go get yourself two.

Incase you were wondering the Irn Bru chilli jam was absolutely tremendous…  So make sure you grab a wee pot of that too.

My one regret from my visit is I forgot to try the Passionista passion fruit sour.

This was a cool pub to visit.  The food was ridiculous, the staff clearly have a passion for what they’re doing, the building itself is unique and kinda special (mind when I said you pee in a vault?), the core beers are clearly loved and respected and the guest draught selection is unreal (31…  31 guest beers…  On tap…  We haven’t even touched on the bottles and cans!).

If you ask the staff nicely they’ll let you get a cheeky taste of the beer before you stick your hand in your pocket…  They’ll also recommend which one to go for based off of the types of beer/lager you generally enjoy.  I love and respect anywhere that takes pride in what it does and the girls and guys in here clearly have exactly that.

I recommend paying them a visit if you’re in the city centre.

You can find Shilling using the links below:

Stay tuned to my Twitter tomorrow for a smashing giveaway with Shilling so you can go sample their wares yourself!

As always if you don’t follow me on social media you’re missing out on my reposting other people’s hard work and randomly brightening up your day with a poorly lit photograph of some beer or gin or something.

Brighten up your timeline via the links below:

See you on the next one.