I’d like it noted before we begin that they are in no particular order. I’ve also put in some notable mentions at the end. Basically gins that didn’t make it to the top 5 but that were interesting and/or exciting in their own way and had something, perhaps, a little unique about them or simply that they’re not what I’d usually go for!

One of the most recent Scottish Gins to hit the market and it really landed with a boom. Generously sending out samples to those that were lucky enough to get one prior to the launch of their first batch. It was quite an exciting time for a gin fan such as myself.

A family run distiller Mackintosh is produced and bottled in Angus, Scotland.

It took about two years to perfect the recipe for their first gin and, let me tell you, it’s something special.

The branding utilises the Lover’s Knot. The knot represents the seasons, infinity, the sun and the mother earth. 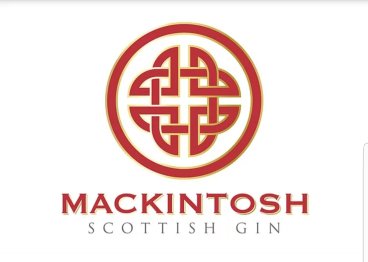 Mackintosh have used nine botanicals to make their gin including citrus fruits, angelica, coriander, elderflower and grapefruit. The family pick up their grapefruit first thing on the morning of distillation and the elderflower is sourced minutes from their front door!

A 96% neutral grain spirit is then distilled with the botanicals and some local water to the perfect ABV of 42%.

Local, local, local. I love that they use locally sourced ingredients as best they can and take great pride in this.

The gin itself is phenomenal. The little sample pack included a can of Mediterranean tonic to mix with it (and a bag or two of haribo!) and recommended either orange or grapefruit as a garnish.

I remember there being a wonderful citrus flavour from it which was complemented by the tonic provided. I garnished with orange and found this to be a smooth, clean tasting gin that went down far FAR too easily. 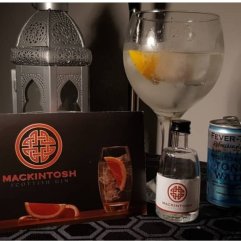 This gin is probably the most local gin to me that’s out there just now. The Wee Farm is located in South Lanarkshire and run by Jenny McKerr and her family. The gin is distilled inside a barn right on the farm.

Jenny says the reason she makes the gin she makes is to pair it up with a lovely steak… In order to achieve this she’s used botanicals to specifically help reach this goal… These include: citrus, thistles, pink peppercorn and all spice. 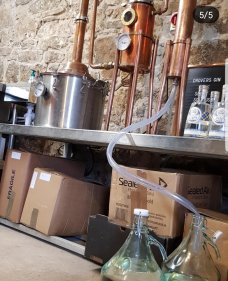 Jenny’s whole family muck in with the kids creating little hats for the bottles that customers can pick up for the tiny sum of £1 if they are lucky enough to visit. The kids also help decide what flavours to make for the gin liqueurs. 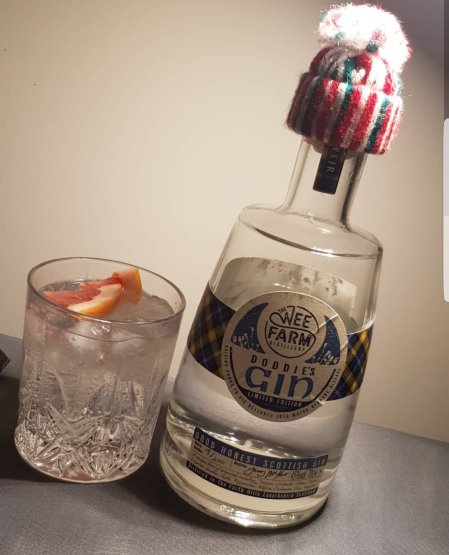 This gin has an amazing flavour that perfectly blends the citrus, which is complimented by the recommended grapefruit granish, as well as the lovely under current of sweet spice from the pink peppercorns.

Its refreshing to have a gin that is a mix of citrus and spice… Also I have had it with steak and can confirm it was glorious!

For more info click the link —> The Wee Farm Distillery

In 2018 I finally got to visit the Makar distillery as part of a combo tour with a local brewery… The tour was fantastic. I mean… The place, by all accounts, is very small… But from that small building come big tasting gins… A single malt and a vodka.

The guys and girls at the Glasgow Distillery Company make a stunning juniper led gin.

The seven botanicals used to compliment the juniper are distilled within Annie… The copper still where the magic happens. Interestingly bottle is designed to reflect the seven botanicals… If you haven’t seen a bottle of Makar then its quite lovely. Tall, slim and edged seven times… I love them… Very simplistic. 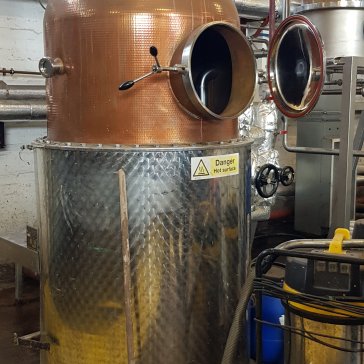 The thing that’s most striking about the way you serve up Makar Original Dry is that the recommended garnish is chilli slices… Which is quite unusual but absolutely amazing.

I had tried most of them at a gin festival last summer and fell in love but, for whatever reason, I never picked them up at this time. I think part of the reason was that I had intended to visit the distillery and wanted to grab them whilst there.

I couldn’t recommend the tour enough if you have a chance. The guides couldn’t have been nicer or better informed. They were also generous with the samples!! Not only allowing us to sample the gins but also allowing us to try their vodka – G52.

When we visited it was undergoing some renovations which would be exciting to see once its done.

The guys here have done additional work for Lidl by making their well respected Aquine gin.

I understand they also did some work for Stirling Gin as well… Which leads me on nicely….

I tried Stirling Gin at a gin festival at the start of the summer of 2018 and I honestly loved it right from the get go…  I don’t know why it’s so good or why I love it so much…  I just do.

the first batch was create in October 2015 and since then they’ve picked up a couple of awards and been finalists for plenty of other ones.  It’s not a gin I’d really seen prior to the festival and since then I’m noticing their online presence really starting to get moving.

They’re in the process of creating a wonderful new distillery that looks like it’ll fit in with Stirling in that it looks like one of those really old, classic buildings that you’d expect to see at a Heritage Scotland site but at the same time I fully anticipate the insides will be modern and perfect for the distillation etc of this fine fine gin. 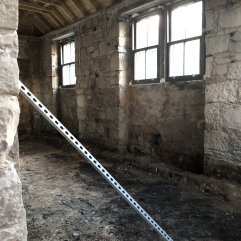 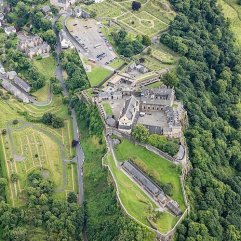 Anyway…  The gin itself is infused with hand picked Stirlingshire nettles, basil, lemon and orange peel, juniper and angelica root…

They recommend Mediterranean tonic and garnishing it with orange peel and basil.

It’s one of those gins that I love to let people who come to the house try but I hate to share…  You know?  But I actually do love letting people try gins like this as  the supermarkets won’t have it so alot of people I know won’t have tried it.

I think these guys will achieve big things in 2019 so keep an eye out.

They launched two gin liqueurs last year based off of folklore which is interesting.  Redcap is a raspberry liqueur.  the name is from a tale whereby if you meet a wicked red Cap on a walk through the countryside you might find that you are spirited away to a fairy realm, a place of ghosts, magic and mischief.  Then there is Green Lady which is bramble and mint infused.  The lore of this one is that of the ghost of the green lady which is apparently often seen on the grounds of Stirling castle.  She allegedly likes to watch people go about their day to day business.  She was apparently an attendant of Mary Queen of Scots and she died in a fire while trying to save the Queen.

I have little samples of these but haven’t done too much with them yet, although I have had recommendations for the serves so stay tuned (eventually) for that!  I have tried them though and they’re lovely.

Arbikie are a little unique in their situation…  They’re a farm…  On the east coast of Scotland near Angus.  The farm has been run by the Stirling family for four generations.

What makes Arbikie really stand out in the industry is that they create the whole thing…  Most brands will buy in a base spirit but not these guys.  They make their own base spirit from crops grown on their own land.

I understand they make two base spirits…  A wheat base (which they use in their Aks Gin…  which is also amazing) and a potato base and its this potato base that kick starts the journey for Kirsty’s Gin.

Kirsty’s Gin is named after Master Distiller Kirsty Black who put together the fine spirit you fill your glass with.

The botanicals in the gin include:

The first time I tried this gin it almost literally blew me away…  I’ve been chasing it since.

It has this wonderful taste of juniper and citrus and is just perfect (in my opinion) with Mediterranean tonic.  Arbikie recommend popping six blueberries and a twist of lemon peel as your garnish.  The thing that catches you, assuming you’ve maybe never had a potato based gin/spirit, is the smooth, creaminess of the liquid…  It’s unexpected and quite lovely. 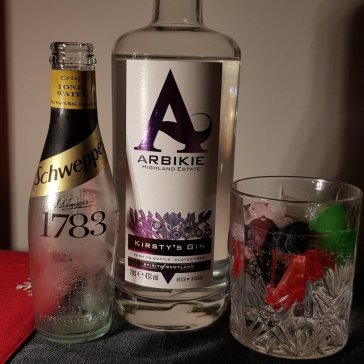 I wanted to include some honourary mentions for other gins that I tried this year but that just didn’t make it into the top banana spots.

I’m not a fan of these types of gin, generally speaking.  I also had recently tried both the “regular” Tiger gin and their vodka and both were decent enough so I was expecting this to be of a similar taste level.

I was honestly really surprised that I enjoyed it as much as I did.  its really fresh and fruity tasting…  I reckon it’ll be lovely in the garden during the summer.

This one caught me off guard as it sounds pretty weird but it was recommended to me whilst in Gin 71 in Glasgow.  its a very unusual gin and I really feel its a one of a kind type gin.  The taste isn’t that of a juniper rich gin but really its more about the lovely sweetness of the vanilla and the warming, slightly sweet spice from the pink pepper.

Serve this with aromatic tonic and some pink peppercorn and raspberries.

I tried Oro at a food festival in August and, of course, had to pick up a bottle.  Its a beautiful, smooth gin to drink and is from Dumfries.  There is a lovely flavour of juniper and citrussy lovliness and the recommended serve for this is Mediterranean tonic and a slice of orange…  I think I read somewhere about popping rosemary in it which I have tried and its wonderful…  Especially if you slightly burn the rosemary…  Amazing.

So that’s a small sample of gins that I tried in 2018 and really enjoyed.  The list is not exhaustive at all but these gins all really stood out to me for whatever reason.

I hope you enjoyed this little article.  Message or comment with your favourite gins you tried last year.

I’d love to hear from you so catch me on my social media for general chats, up to date info and the most amateur photography of booze you’ve ever seen in your life…  But I am trying to improve!!