When I was a kid the local shop sold something called a “Lucky Bag”. Essentially this “Lucky Bag” cost £1 of my parents hard earned cash and you had no idea what was inside until you opened it.

Absolutely, 100% of the time contained in the “Lucky Bag” was… Rubbish… Total rubbish. Some sweets and some useless, poor quality plasticy toys… Thing is though I was completely addicted to these stupid things… Similarly to Kinder Eggs I fell in love with the surprise element and the fun and excitement of pulling out each individual item… Loved it… Even though the stuff was terrible.

Subscription boxes are grown up lucky bags aren’t they? Really? I currently subscribe to five boxes… Two beer, two gin and one of american sweets. Today I want to show you the two gin boxes I get and talk you through the differences between the two.

First of all is, what I believe to be, the industry leader. The Craft Gin Club seem to be the biggest and most popular gin subscription box on the market at the moment. An early adopter of the concept and they’re certainly leading the charge in terms of exclusives and giving the customer what they want. 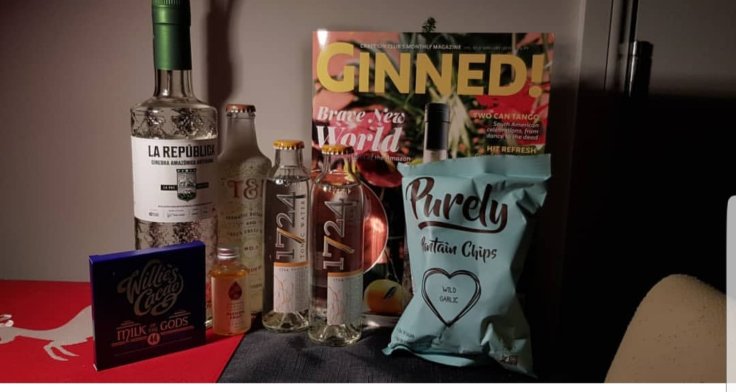 There are several subscription options including monthly and bi-monthly. I pay monthly (fear of missing out!!!) and I fork out £40 for the pleasure. For that money you (generally) receive a 70cl bottle of gin, two mixers, a sweet and savoury snack. You also get little extra bits on occasion like a bonus snack or drink of some kind, syrups have been appearing recently and you always get their magazine discussing the gin, the extras and giving cocktail and serve suggestions which I love. The magazine has a little puzzle too for those that are so inclined and competitions. On rare occasions you’ll received a 50cl bottle of gin but I think this has happened to me once and it was because the distiller only seems to sell 50cl bottles but, to make it up to the 70cl total we were also sent a 20cl bottle of a flavoured gin from the same distiller.

I’ve been a member of the club going on two years and I’ve never considered stopping it. The consistency of the product is phenomenal with any issues fixed up almost right away. I say that But I actually need to message them as one of my photos won a runner up spot in the Ginstagram one month and I haven’t received my prize yet! 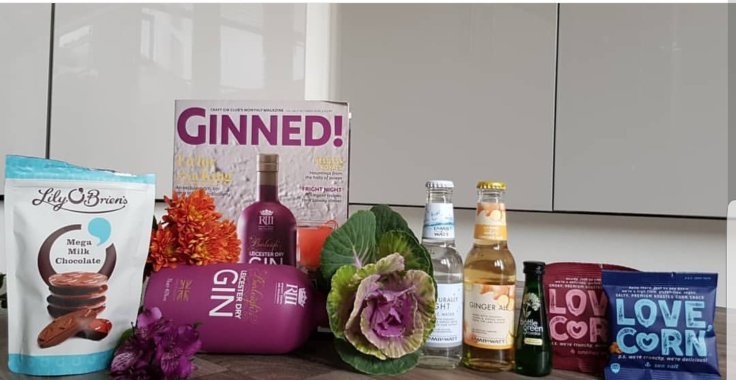 Of the boxes I’ve received there have been, maybes, three gins that, at first I wasn’t sure of. Of those three gins two of them grew on me… The other one will forever gather dust I reckon… I just can’t get on with it at all no matter what I do with it.

The thing that I love most but that also does cause frustration is the exclusive gins. I love that they get gins made especially for their customers and they’re always amazing… The down side is the gins are irreplaceable! The club do often sell off any excess stock at a reduced cost which is great. Of the last six months I’m pretty sure all six have been exclusives to the club.

All in this box is a win for gin fans. Great guides with it for how to “use” the gin and some fab exclusives and amazing snacks. The down side being if the gin isn’t to your taste you’ve got an entire bottle to figure out what to do with.

The other ginny box I get is the Club Connoisseur which is standard at bi-monthly. This one is similar to the Craft Gin Club but ever so slightly different… 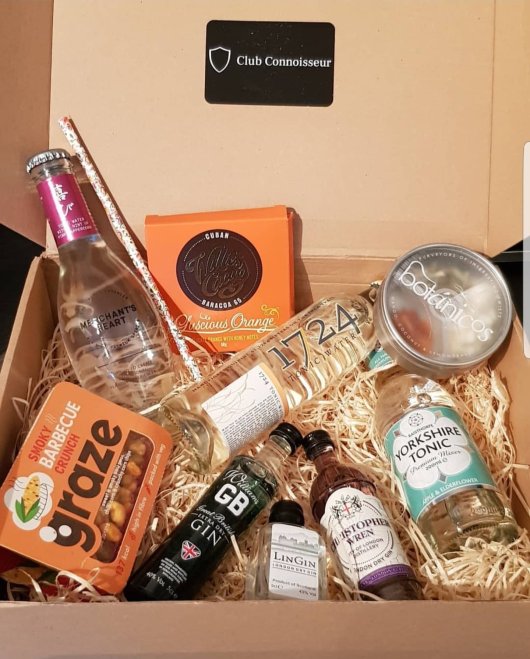 I think I was one of the first customers for these guys and really enjoyed providing feedback and felt quite involved in the early evolution. A very approachable company and not afraid to take the constructive criticism alongside the positive feedback.

Costing for this guy is about £25 every other month. For that cash you’re getting a fairly full box of goodies including the usual sweet and savoury snack and mixers. The differences are interesting with this box compared to the other one… You get a little tin of dried botanicals which is great. These are lots of fun to play with and I do enjoy throwing them in my gins and seeing what happens… Although they’re not always matched to the gins which is something I think they should consider looking into. The other really obvious difference is that you don’t get one 70cl bottle, you get three 5cl. This is a fun way to sample lots of different gins over the course of the subscription. I’ve tried some really cracking gins through these guys. It’s worth noting that one time I received a gin liqueur but I’m not sure if this was because it was an extra box sent out last minute due to the post office messing up a few of their deliveries.

You also get a few tonics and, like the botanicals, they don’t always seem to be selected to be paired with the gins provided. I’ve had some really interesting tonics from them and some not so good ones and some I’ve no idea what to pair them with as they’re a little bit oddly flavoured.

In terms of magazines they do not provide one. The first box I received did have one, however, it wasn’t a special magazine to the box or related to it at all but it was a nice extra. It struck me that when they reduced the cost they had to get rid of the magazine as it was quite sizeable and, I dare say, quite pricey to post out. Also it was a general spirits magazine, which, for that first box suited because the initial idea for the box appeared to be including a variety of spirits which was laterally changed to solely gin… I’m not disappointed by this change as, it turns out, as much as I tried I just couldn’t get on with other spirits. 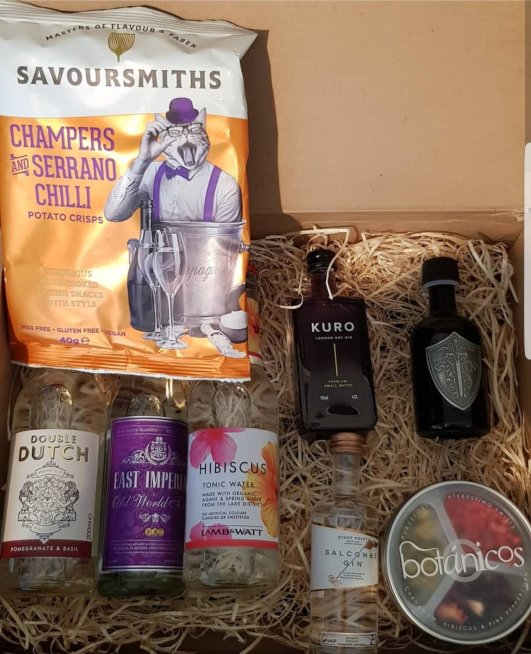 The other negative I have with this box is that throughout the life span of each box the contents vary. I’ll receive my box then some weeks later as other boxes are sent out and publicised the gins and extras are different… This awakens the little green jealousy monster in me some times as I’ll see folk getting gins I would have preferred in my box over something I received. I appreciate for a smaller company that stock may be an issue and as new customers join it may be a case of just sending out what is readily available to get a box to the newer customer quicker which is great but it can be frustrating to see the inconsistencies.

With Club Connoisseur the customer experience and satisfaction appears to be higher on their agenda than it is for a lot of other companies. The customer service I have received from them is second to none and, as I stated at the very start of this review, they are a highly approachable company and will go out their way to keep you happy… Even when the issue isn’t their fault.

If you’re new to gin the Club Connoisseur box is absolutely ideal as they send you out three different gins allowing you to try a greater range of gins and, generally, get their hands on some really cracking liquids.

From them I’d love the inclusion of tonics more specifically chosen for the gins and, if not a magazine about the box and its contents, then more posts with information about what I’m drinking and how best to enjoy it. 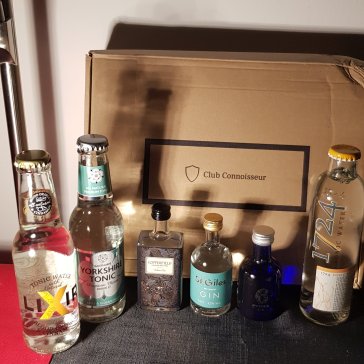 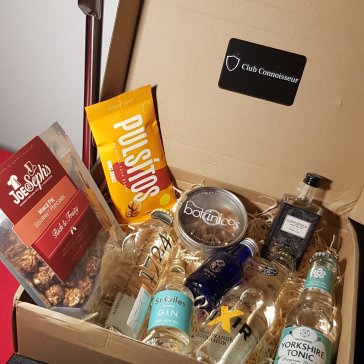 All in these are two very different but very similar boxes. Each have their positives and negatives and both are very very good. Honestly I recommend both but if you’re in a position to only pick up one then, hopefully, I’ve given you enough info to make an informed choice for which one would be best suited to your own individual needs.

To join the clubs click the links below (yes I figured out how to include links… I’m literally evolving before your eyes!)… If you plan to join please tell them I sent you and I think we’ll both save a few quid!